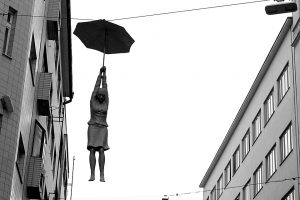 Downsizing. It’s a nasty world. It can shake your reality not to mention your bank account. Sometimes you feel as though you’re hanging in between worlds… the familiar and the unknown (I admit I often felt that way). Just holding tight.

However, contrary to some people’s thoughts, life is not over when the traditional corporate job ends. Not to sound overly optimistic but —

— it’s often an opportunity to reinvent yourself to who you never knew you were or to develop the talents you thought were ‘no big deal.’

Recently I had the pleasure of meeting a special lady whose story is not only inspiring but delicious – so to speak! Briana Carson’s 20 year telcom corporate job ended and an encore career began with enrollment in culinary school to perfect her skills in savory cooking.

However, culinary school would take Briana in yet a different direction. To her surprise she fell in love with pie baking and her vision changed once more. She left culinary school and spent almost a year perfecting the craft of making artisan pies. After selling her pies at local festivals and farmers’ markets she opened a retail shop in a town just north of Atlanta and Crave Pie Studio began yet another part of Briana’s new adventures. 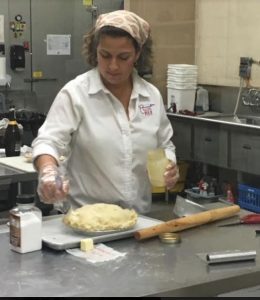 Toby, Bloomberg Marketing: Your story as a pie baker is an inspiration especially for people who want to start “encore careers.”  Let’s begin your story by telling how you developed a passion for pie making when you began down the culinary road with a focus on savory foods.

Briana Carson, Crave Pie Studio: I came to be a pie baker quite late in life. I did not learn how to bake at my grandmothers side, nor did I inherit family heirloom recipes.  Actually, I never even liked baking or sweets until I fell in love with pie a few years ago.

In 2010 I was laid off from a 20 year career with a global telecommunications company. As a woman of faith, I prayed to God for work that would be meaningful and a blessing to others, but I really had no idea what it would be. I never would have imagined it would be as a pie baker!

Since I had a lifelong love of food and cooking, I decided culinary school would be a fun place to hang out and learn while figuring out what to do with the next chapter of my life. While taking Baking 101, I began practicing how to make a traditional apple pie for the final exam. It was during that time that I became enchanted with pie.

Toby, Bloomberg Marketing: You might have chosen to bake pies just as a hobby for lucky family and friends. People start businesses for many different motives but I’ve found food makers often have their own special reasons. Why did you launch Crave Pie Studio?

Briana Carson, Crave Pie Studio: After leaving school, I practiced the craft of pie baking for several months while perfecting my core recipes. I baked for family, friends and neighbors before deciding to try selling at craft fairs and a farmers market. When I got such a positive reaction from customers, I decided to take the plunge and turn it into a business. 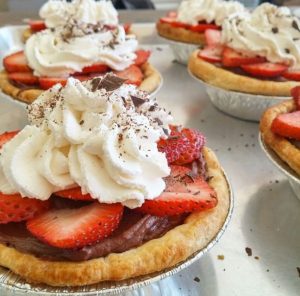 Toby, Bloomberg Marketing: For many foodprenerurs aka food makers aka food entrepreneurs sales and promotional channels are often local fairs, farmer’s markets and perhaps an eCommerce website. Why did you want to take on the expense and responsibility of a retail shop?

Briana Carson, Crave Pie Studio: When I started the business, there were no cottage food laws in Georgia, so I had to rent expensive commercial kitchen space in order to sell legally. At the time, it made sense to invest in my own space in order to establish a retail presence. Since there were no pie shops in the area, there was a niche in the market that I could fill.

I was very blessed to find a charming space in an historic building on Main Street in the up and coming Downtown Duluth neighborhood. It just seemed like a natural fit for a nostalgic concept pie shop. There’s a small town, yet creative urban vibe and the community has been so supportive of all of the small businesses there.

Toby, Bloomberg Marketing: As you well know, competition in the food product world is fierce. What makes your products extra, extra special? 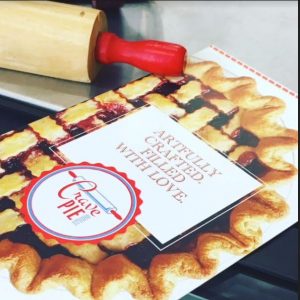 Briana Carson, Crave Pie Studio: We offer mini personal size pies that are baked entirely from scratch using only the finest seasonally available ingredients. Our menu changes daily and is inspired by the creativity of our bakers. Full size pies and little 3″ pies by the dozen are available by custom order so the pies you crave are always fresh.

Toby, Bloomberg Marketing: What one tip would you give to a person who wants to go down the path of being a food maker? Why is this tip important to you?

This is possibly the best time in history to become a food maker. There is such an appreciation and demand for local, artisan crafted foods.

There are so many different ways to sell, from e-commerce, craft festivals, pop up markets and even shelf space in large retailers that is dedicated to small independent makers.

Toby, Bloomberg Marketing: What are the most popular flavors at the Crave Pie Studio? What is Your favorite pie and why?

Briana Carson, Crave Pie Studio: Our most popular flavors are Chocolate Chess, which is like a gooey undercooked brownie, and Chocolate Bourbon Pecan, which is made with Belgian chocolate and an ample shot of Kentucky bourbon. I personally love fruit pies. My all time favorite is Strawberry Rhubarb…unless it’s autumn, then my favorite is Cranberry Apple Pear with Walnut Streusel.

Toby, Bloomberg Marketing: As is our interview tradition, I’ll toss the last bite (or word) to you. Wrap it up anyway you’d like.

Briana Carson, Crave Pie Studio: Pie doesn’t have to be just an annual holiday dessert because every season brings new flavor options. I want people to enjoy pie, whether dessert or savory, throughout the year. 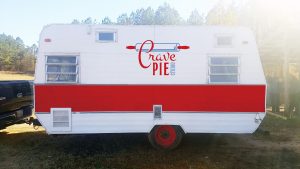 In order to serve pie to a wider audience I am excited to announce that Crave Pie Studio will soon offer pie catering for weddings, corporate events and private parties in a renovated vintage camper trailer, which I have named the HapPie Camper. Crave Pie Studio will be serving up pies and retro vibes throughout the Metro (Atlanta) area, later this spring. You can follow along as we make progress at @happiecamperatl or at cravepie.com. 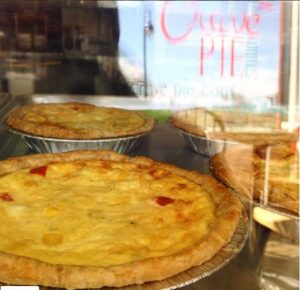